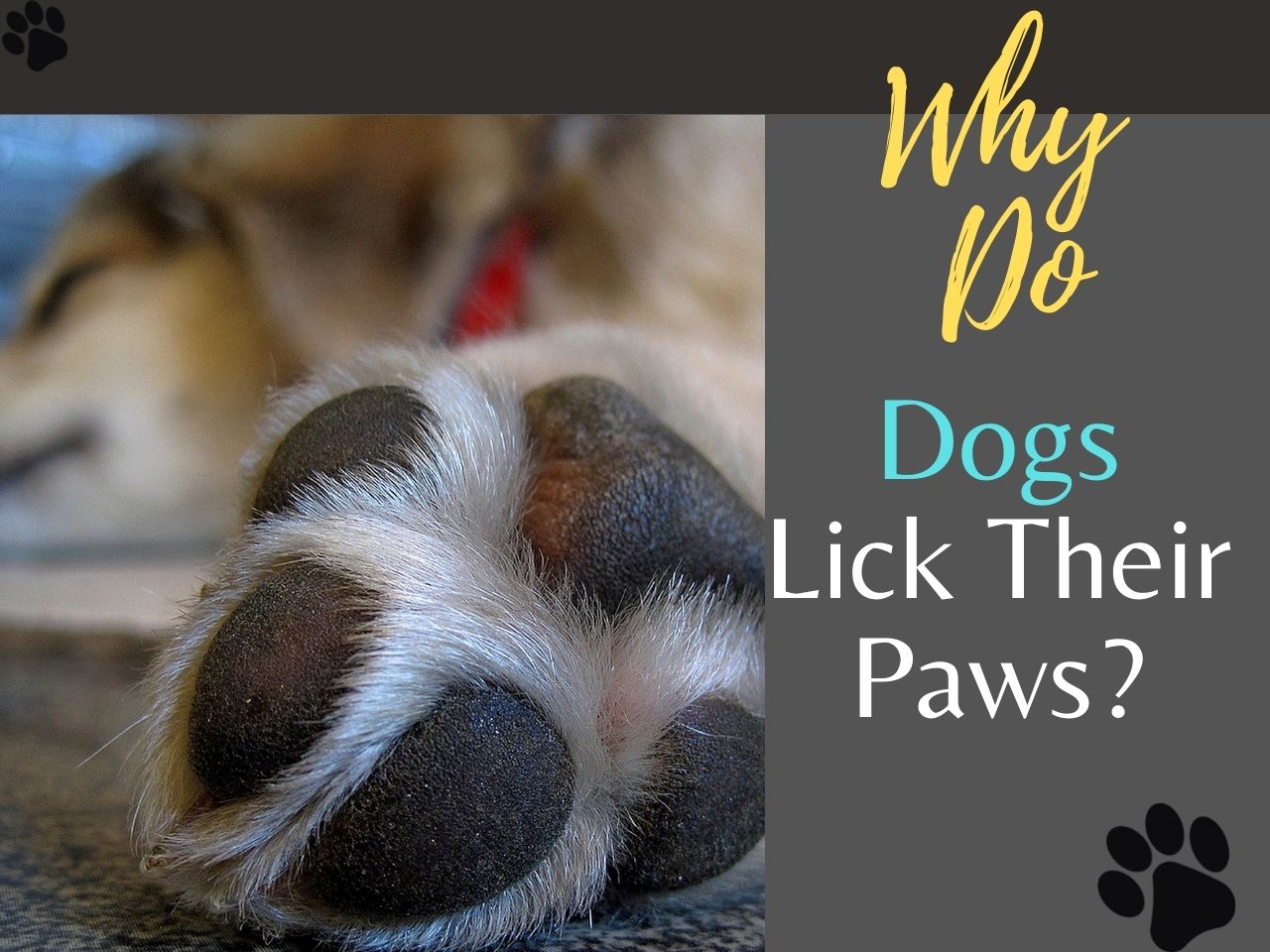 Have you ever wondered? Why do dogs lick their paws? Vets are presented with this question very often by pet-owners who are concerned about their dog licking its paws. This behavior is normal amongst pets, just like tapping your foot or playing with your hair. This is a part of their routine life and only becomes a problem if your pet starts doing it in excess or more frequently than normal.

Your dog can be licking its paws out of boredom and stress or this could be the result of paw irritation. If you find your pet licking and nibbling its front paws and forearms excessively, you should be concerned because most of these cases (no matter which one of the above stated causes it is) are complicated and have excruciatingly difficult solutions.

Also Read: What Can I Give My Dog For Diarrhea?

Why Do Dogs Lick Their Paws Or Feet?

The most common reasons of your dog licking paws can be:

Also Read: What Kind Of Dog Should I Get? – 9 Factors To Consider

Remedies For Your Dog Licking Paws

Considering the fact that there are so many reasons for dog licking and biting its paws, you should take your dog to the veterinarian once you’ve realized that the issue is present. With help of the vet, you can figure out the cause and determine the best treatment plan. The treatment may include:

How To Prevent Dogs From Licking Their Paws?

As the famous saying goes: Prevention is better than cure. Wouldn’t it be great not to go through the fatigue of identifying and treating your dog’s issues and prevent them from happening in the first place? Well, follow these steps and you surely can reduce the chances of your dog licking its paws:

Examine your pet for injury every now and then and at the first sign of any irregularity, contact your vet to get it treated. When an injury is escalated to a point that it starts causing severe discomfort to the dog, it reacts by licking and biting the affected area(s).

Make sure that your dog doesn’t encounter any chemicals where it has access to. Make the garden a no-go-area for your dog if you are using chemicals there. Use quality shampoos that are made for dogs and find one that has moisturizing ingredients to hydrate the skin.

Be picky when choosing food for your dog. A well-balance diet is necessary for your dog and you can find that in pet foods that have a good formula for vitamins and minerals including fatty acids. Prevent its indulgence in greasy table scraps and left over food that may harm the integrity of its healthy body.

Provide substantial amount of attention to your pet and spend quality time with it so that his stress and anxiety levels stay normal. If you see any behavioral disorders, redirect his attention by starting to play with it or creating its interest in the toys it loves.

If you go all “Sherlock Holmes” on the issue, you may be able to deduce with remarkable accuracy what the cause is. Let’s have a look at how this can be done:

The problem is more apparent in white and blond-haired breeds as their saliva discolors their paw fur when they compulsively lick and chew them. Greyhounds, Dalmatians and cattle dogs are more likely to relieve stress through over grooming and paw licking as they are highly alert working breeds. This issue can be seen in any breed but statistically this is observed more in purebred or two-way crosses than in the general mutt population.

Start of the Issue: Sometimes the issue of compulsive licking runs in the family. The dog is more likely to follow the trails of its siblings or parents in licking its paws than a dog with a non-licking family background. In the second year of dogs in the group, this habit is usually developed. These kinds of prevalent issues can’t be entirely cured but you can do many things to reduce the frequency and intensity of it. If the issue isn’t inherent (i.e. it was developed later in life), remedies pertaining to improved environment, life style and diet may prove to be entirely successful in resolving the issue.

“When” matters: Dogs who only lick their paws in a specific situation or set of situations are quite likely to respond to treatment involving behavior modification. This can be identified by observing “when” your dog is licking its paws and figuring out a pattern to it. The dog might only be licking its paws when left alone and feeling deprived of attention or after a bath. This can help you identify the trigger and solve the issue accordingly.

“Number of paws” matter too: If your dog is paying too much attention in licking a single paw, examine the paw and you’re most likely to find the problem there. It could be a small issue with the toenail that irritates your dog and causing it to lick or bite the paw. The issue can also be a wound cause by a thorn or some sharp edge that cut the lower pad of the paw. The cause of irritation in older dogs is also found to be skin tumor. It can also be a swollen area within the toes, containing an accumulation of pus (abscess). Examine carefully so that you may find if there is a wound or the thorn is still in their waiting for you to be picked. The cause can also be internal resulting from a broken/fractured bone or arthritis affecting a single joint.

Is it just the paws? The compulsive paw licking can also be part of a bigger set of symptoms identifying a bigger health issue. Look for other anomalies along with paw licking such as discharge from its eyes, loss of hair, infection in ears, musty odor (seborrheic dermatitis), sneezing, rashes etc. These can help you identify presence of fleas and ticks, allergies or contact sensitivities. It is better in this scenario to go for a general health screen that includes blood tests and microscopic skin scraping (to find those nasty microscopic infestations) and rule out a larger issue. Go for this is the simple methods of control are unable to benefit the condition and problem is recurring.

Look closely, you may see the Triggers: Start keeping record of the things that appear to make this problem worse. Note if seasons or specific months increase or decrease the intensity of your dogs compulsive licking habit. Also notice that is the issue reduced in your presence and when you’re not around your dog bites and licks its paws more. You might also observe that the dog gets irritated and starts worrying its paws after grooming sessions or baths. Also keep record of the events that precede a sudden initiation of the problem such as your pet returns from the yard and the problem is heightened. Changing the location directly affecting your pet’s condition is also a clue for you to note down. Abnormal change in the weight and change in activity level are notable identifiers and should be observed. Limping or staying stiff and showing bizarre behavior in your absence point you in the direction of possible causes as well.

So, when you say that the dog is man’s best friend, it means that the man (owner) has to put in energy and love as well for keeping the relationship and dog healthy. Your dog licking paws might seem like a small issue, but ignore it and it just might become a problem you didn’t imagine it would become.