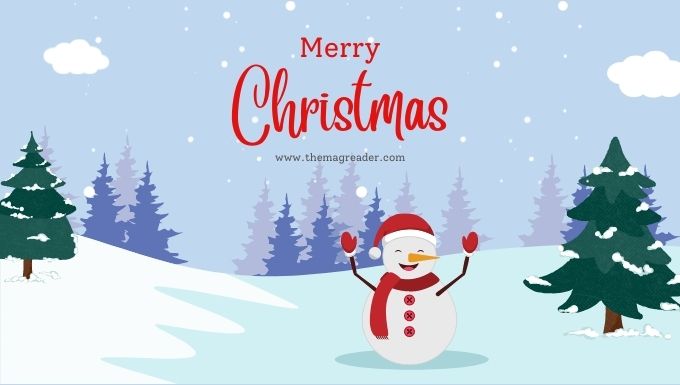 Christmas is one of the most popular and widely celebrated holidays in the world. Christmas is a time to celebrate, spend time with family and friends, and share special traditions. But Have you ever wondered why Christmas is celebrated? and what is its origin and what are the reasons for celebration?

Long long ago a woman named Mary was visited by an angel named Gabriel. He told her that she was pregnant with a boy who would be named Jesus.

A few months later, Mary and her soon-to-be husband Joseph had to leave their home in Nazareth and travel to Bethlehem.

When they got to Bethlehem all the inns were full so Mary and Joseph had to sleep in a stable. It was in this stable that baby Jesus was born.

Do you know what this old story is about?

It is a holiday enjoyed by many people around the world, Even those who aren’t religious at all. It’s seen as a special day every year when family and friends come together to spend quality time with each other.

Christmas is primarily considered to honor the birth of Jesus Christ about 2000 years ago. Throughout history, Christians have believed that Jesus was born the night before December 25th; while some other religions honor other dates for this celebration.

Why Christmas is celebrated on December 25?

No one knows the real birthday of Jesus! and It is not mentioned in the Bible, but why do we celebrate it on the 25th December? There were a lot of debates among the early Christians about when it should be celebrated! Also, the birth of Jesus probably didn’t happen in the year 1 but slightly earlier, somewhere between 2 BCE/BC and 7 BCE/BC, possibly in 4 BCE/BC (there isn’t a 0 – the years go from 1 BC/BCE to 1!).

The first recorded Christmas celebration took place in Rome on December 25, AD 336.
Many people were interested in the date of the nativity in the third century. Roman Emperor Constantine was the first Christian Roman Emperor. But that time it was not an official Roman state festival. After a few years, Pope Julius I formally declared that Jesus’ birth would be commemorated on December 25th.

How is Christmas celebrated?

You might have noticed that Christmas is full of special symbols these symbols can range from the nativity scene which shows Jesus’s birth in the manger, to people, plants, animals, food and lots of other things. You’ve probably seen some of these symbols around during the month of December.

These symbols have been introduced over many many years from tales legends and traditions. Today there are some symbols that don’t even share a connection with the christian story of Christmas just like many other celebrations around the world.

Christmas day also involves the giving of gifts, The giving of gifts began with three wise men who heard of Jesus’s birth in the manger and traveled a long way to bring him gifts of gold frankincense and myrrh.

These days many people give presents to their friends and family continuing this tradition. Did you know that people leave presents in different places depending on where they’re from, In some countries gifts are placed under a Christmas tree while others put them in stockings that are hung up on a wall or fireplace and some even put them in children’s shoes.

Also Read: The Truths Behind 10 Of The World’s Great Wonders

Many Christians will attend mass or a service at church on Christmas eve or on Christmas morning this mass or service brings Christians together in worship to celebrate the birth of Jesus.

Everyone celebrates special days in their own way different people have different traditions that they enjoy during their festivals. During Christmas you can say Merry Christmas as a greeting to people who are celebrating.